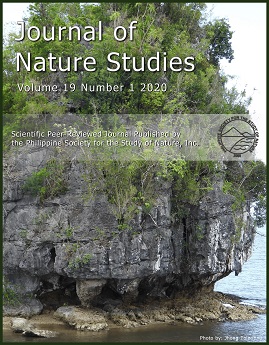 Effect of the MV St. Thomas Aquinas Oil Spill on Zooplankton Composition and Abundance in Mactan Island, Cebu, the Philippines

ABSTRACT – A survey of zooplankton composition and abundance was conducted on four nearshore waters last May 2014, 9 months after the oil spill by the passenger vessel “MV Saint Thomas Aquinas.” Samples from three sites hypothesized to represent different degrees of oil contamination along the south coast of Mactan Island in Cebu, the Philippines were compared with those from the reference site in Dalaguete, Cebu. A total of six phyla with over 15 species and a density of 630 individuals/L of micro- and mesozooplankton were identified where ciliates specifically aloricates coming out as the most numerous. The average zooplankton density in the reference site (mean=143) differed significantly (p=0.04) from zooplankton density observed in S2 (mean=12.33), a moderately affected site. The aloricate ciliates, the copepods, and the zooplankton eggs were evident in all the sites. Although there was no significant spatial variation (p<0.05), the aloricates were more abundant in the unaffected and lesser affected sites. The copepods (p<0.01) and zooplankton eggs (p=0.03 and p<0.01) appeared to be good zooplankton predictors for the effects of the oil spill in this study as they have significantly higher abundance in the unaffected and least affected sites while controlling for other factors. Further investigation is recommended to monitor the temporal dynamics of the zooplankton population and abundance taking into consideration other intervening factors such as physicochemical factors, trophic relationships especially with bacteria, as well as the organisms’ physiology, behavior, life stages, and sizes. The use of ratios of abundances or other indices can also be explored. Regular monitoring is strongly suggested especially in areas where the probability of oil spills is high and data is absent.

About Journal of Nature Studies
The Journal of Nature Studies, the official primary and scientific publication of the Philippine Society for the Study of Nature, Inc. (PSSN), is an ONLINE, open access, double-blind peer-reviewed journal in English that publishes reports of original research in the natural and applied sciences (agriculture, biology and its allied fields including studies on social sciences as related to nature and the environment). It also publishes notes and reviews on relevant and timely subjects on nature. The Journal of Nature Studies aims to cater to global or international readership thus the broad composition of its Board of Editors/Reviewers who are actively publishing. Two issues a year comprise a volume. Supplements may be issued anytime as necessary.